Opened in 1928, the Plummer Building is an architectural masterpiece 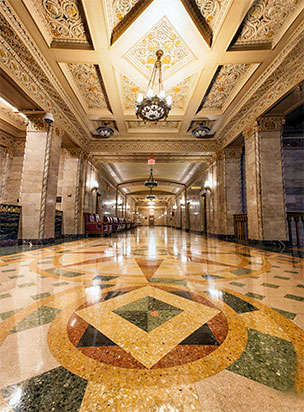 The lobby features marble from around the world. Opened in 1928, the Plummer Building is an iconic symbol of Mayo Clinic, designated as a National Historic Landmark. It is named for Henry S. Plummer, M.D., the “diversified genius” who designed it and who created many of the systems and procedures – such as the medical record and registration system – still in use at Mayo Clinic today.

Dr. Plummer wanted the building to be efficient as well as aesthetically pleasing. Medical specialties were located throughout the 15-story building to facilitate easy movement of patients and collaboration among colleagues. An extensive library housed books and medical journals necessary for the growing staff. Medical records traveled throughout the building via a pneumatic tube system.

Although patient care has shifted to the Mayo and Gonda buildings and other facilities on the Rochester campus, the Plummer Building remains an integral part of Mayo Clinic, accommodating many administrative, academic and support functions.

The bell tower is lit at night, highlighting the building’s ornate architectural style. During the holiday season in the 1950s and ‘60s, the south wall was illuminated with colored lights that evoked a Christmas tree. This custom was revived during the Mayo Clinic Sesquicentennial of 2014 and continues today. Learn more about lighting of the Plummer Building.

Highlights of the building include: